If you have any suggestions for group outings please get in touch. If you have any questions or queries don’t hesitate to contact us  via our main email:   debeauvoirwi@gmail.com

Nestled in a small corner in Camden Market’s Stables is the world’s first bricks and mortar museum dedicated to vaginas, vulvas and the gynaecological anatomy. In a year when our National Federation Of Women’s Institute’s campaign is ‘Don’t Fear The Smear’ The Vagina Museum seemed a fitting destination for our first De Beauvoir WI trip of the year.

The museum launched in 2017 with a series of pop-ups and found a more permanent base in Camden last year. The current exhibition, ‘Muff Busters: Vagina Myths And How To Fight Them’ highlights a mere handful of the myths that still circulate today.
Our gynaecological anatomy is still a taboo subject for many, and the aim of the exhibition is to give an introduction to how every individual and their body is unique, to dispel the mis-information that prevails around this part of our bodies and to open up conversations.  We were lucky enough to have organised a guided tour around the museum, and our guide was hugely informative and passionate about the subject matter.

From the increase in demand for labiaplasty to a suitcase filled with cleaning products that do nothing to help the self cleaning vagina, from medical textbooks still in current use that perpetuate myths around multiple partners, to the actual function of the hymen and its links or not to virginity, there was so much more information in this exhibition.

Our overriding chat was how we all wished we had been able to access all this information as teenagers struggling with our own bodies and the myths and fairy tales we were exposed to at that age. It was a really fascinating exhibition, so worth visiting. ‘Muff Busters’ is on now until the end of March when a new exhibition will be launched and we hope to make a return trip.

We enjoyed a fabulous tour around the Kingsland Basin with Gideon and Esther, who since moving into the basin have created a wonderful habitat for birds, butterflies, insects and even bats. They talked us through the history of their involvement in the basin. When they initially moved in, the far end of the basin was essentially a rubbish tip, filled with plastic and detritus and smelling really vile. A chance conversation with a neighbour sent them looking for the  original plans for the renovation which had included planting up the far end of the basin to bring back a biodiverse environment.  Much phoning, writing and negotiating later, the original plans were executed and they have planted up the basin with indigenous plants.  Together with other organisations they have continued to expand and created and installed floating islands of habitat and wildlife that run along the side of the basin and out onto the sides of the canal creating homes and meals for all kinds of wonderful creatures.  There is even a ‘day bed’ for some visiting swans (created by the swans from a floating island).  If you go down at dusk you may even be lucky enough to catch some visiting bats who feast on the various insects to be found there. They are currently working hard to challenge some new plans for building renovations that would cut out a lot of the light and thoroughfares for the bats, birds and insects that come to visit. We are hoping to get further information on how we might add our individual voices to this protest. 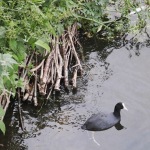 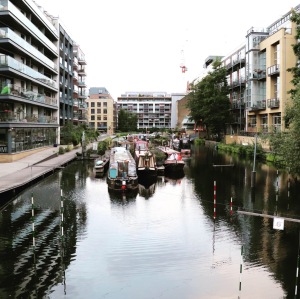 Esther showing us where the swans have made their ‘day bed’

St Augustine’s Tower in Mare Street dates back to the 13C, is listed Grade 1 and is the oldest building Hackney. It survived when the rest of the original church was demolished in the late 18C, when St. John at Hackney was built as a replacement. There are four floors connected by a spiral stone staircase, a working clock from the late 16C, panels telling the history of Hackney and spectacular views from the roof (over 100 steps up though!). It is usually open just once a month on the last Sunday.

It is managed by the Hackney Historic Buildings Trust and Laurie Elks (who is coming to speak to us about the changing face of Hackney for our October meeting ) gave us a private tour of the tower and we watched the sunset over London with amazing views across the city. Thank you Laurie for your generosity and we look forward to seeing you in October. 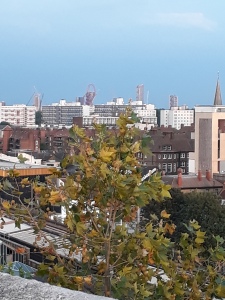 check out the ArcelorMittal Orbit in the distance

what a view, what a sunset

Previous outings this year include our hugely inspiring and informative away day to Bletchley Park….

On  Saturday 30th June we had a fascinating trip to Bletchley Park.  There was glorious weather and we were joined for lunch by some new friends of the feathered variety (pic below).  There was so much to see and many of us talked about returning with friends later this year (the ticket is valid for 12 months and you can visit as many times as you want to). It was awe inspiring to see where all that vital work took place and to visit the Huts in the sunny weather made you realise how hot it must have been to work 8 hour shifts in such closed spaces, (and how cold in the winter).  We were very lucky as at 1pm we were treated to a flyover by a Spitfire that looped around the grounds a number of times before heading off.  If you have never been to Bletchley, do go, it’s an amazing piece of history. 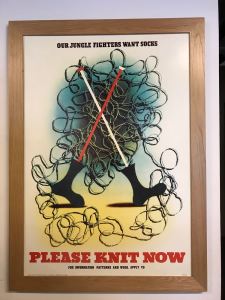 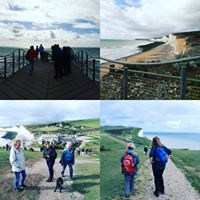 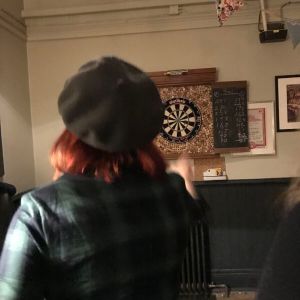 One thought on “DBWI Trips Out”

This site uses Akismet to reduce spam. Learn how your comment data is processed.